Terraform modules are self-contained pieces of infrastructure-as-code that abstract the underlying complexity of infrastructure deployments. They speed adoption and lower the barrier of entry for Terraform end users who consume pre-built configuration. As a result, they should use coding best practices such as clear organization and the DRY ("Don't Repeat Yourself") principle wherever possible.

This guide discusses module architecture principles to help you write composable, sharable, reusable infrastructure modules. These architectural recommendations can be helpful to enterprises using any edition of Terraform. However, some features like the private module registry are only present in Terraform Cloud and Enterprise.

This guide complements and expands on the Terraform modules documentation.

In this guide, you will:

The first step in creating a new module is to find an early adopter team and gather their requirements.

Working with this early-adopter team allows you to hone the module functionality by ensuring it is sufficiently flexible through the use of input variables and outputs. In addition, they can onboard other teams with similar requirements with minimal code alterations. This eliminates code duplication and reduces time-to-market.

After you do this, there are two main steps to keep in mind.

Scope the requirements into appropriate modules

Deciding what infrastructure to include is the one of the most challenging aspects about creating a new Terraform module.

Modules should be opinionated and designed to do one thing well. If a module's function or purpose is hard to explain, the module is probably too complex. When initially scoping your module, aim for small and simple to start.

Modules, like any piece of code, are never complete. There will always be new module requirements and changes. Embrace this and aim for your first few module versions to meet the minimum viable product (MVP) standards. The following is a list of guidelines to keep in mind while designing your MVP.

Output as much information as possible from your module MVP even if you do not currently have a use for it. This will make your module more useful for end users who will often use multiple modules, using outputs from one module as inputs for the next.

Remember to document the outputs in the module's README.

Note: This example uses AWS naming, but the patterns described are applicable to all cloud providers.

After reviewing the consumer team's requirements, the producer team has broken up the application infrastructure into the following modules: Network, Web, App, Database, Routing, and Security.

After the Terraform producer team writes the modules, they should import them into the private module registry, and advertise their availability to the respective team members for consumption. For example, the team members responsible for networking would use the network Terraform module to deploy and configure the underlying application network.

The network module is responsible for the infrastructure's networking. It contains the network access control lists (ACLs) and NAT gateway. It could also include the VPC, subnets, peering, and direct connect if they were necessary for the application. 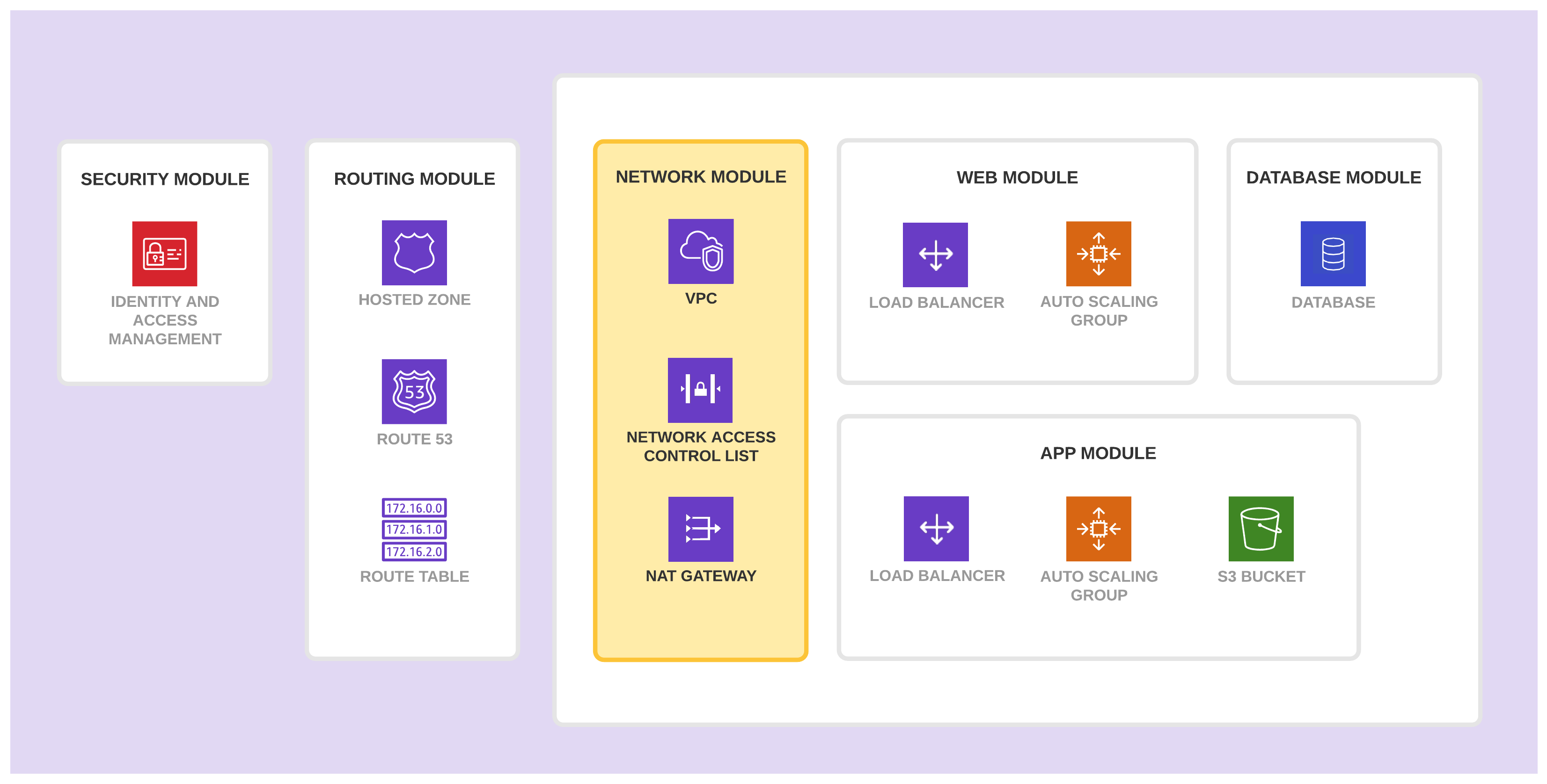 This module contains these resources because they have high privilege and low volatility.

The network module returns outputs that other workspaces and modules can use. If VPC creation is multi-faceted, you could eventually split this module into different modules with different functions.

There are two application modules in this scenario — one for the web tier, the other for the app tier.

After the Terraform producers write both modules, they should distribute it to the respective team members to deploy their application. As the application team becomes more familiar with Terraform code, they can suggest infrastructure enhancements or changes via pull request in conjunction with releases of their application code.

The web module creates and manages the infrastructure needed to run the web application. It contains the load balancer and autoscaling group. It could also include EC2 instances, S3 buckets, security groups inside the application, and logging. This module takes an AMI ID of a prebuilt (via Packer) AMI that contains the latest web application code release. 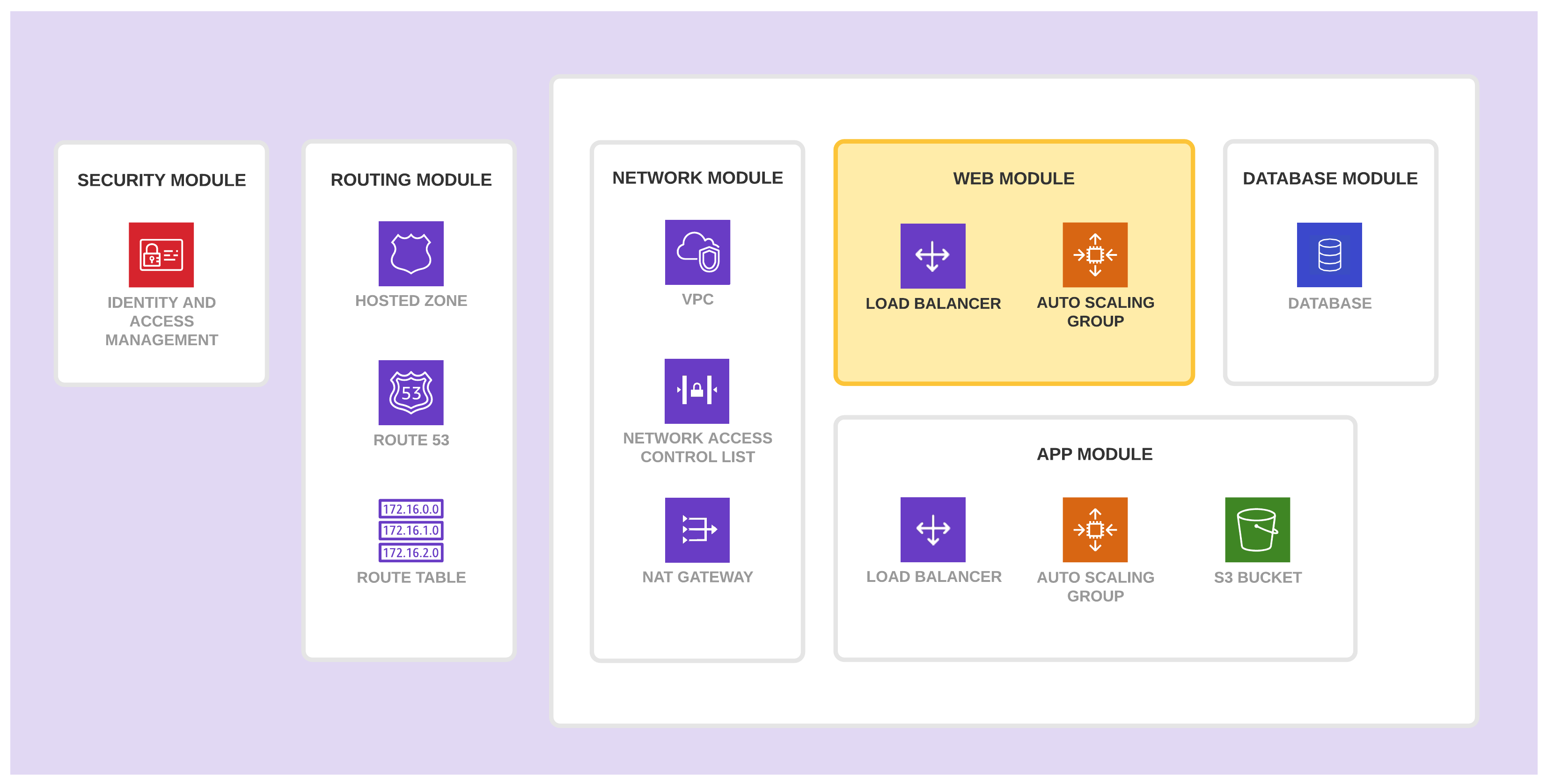 This module contains these resources because they are highly encapsulated and have highly volatility.

This module contains these resources because they are highly encapsulated and have highly volatility.

The database module creates and manages the infrastructure needed to run the database(s). It contains the RDS instance used by the application. It could also include all associated storage, all backup data, and logging.

The routing module creates and manages the infrastructure needed for any network routing. It contains hosted zones, Route 53 and route tables. It could also include private hosted zones.

The security module creates and manages the infrastructure needed for any security. It contains IAM resources. It could also include security groups and MFA. 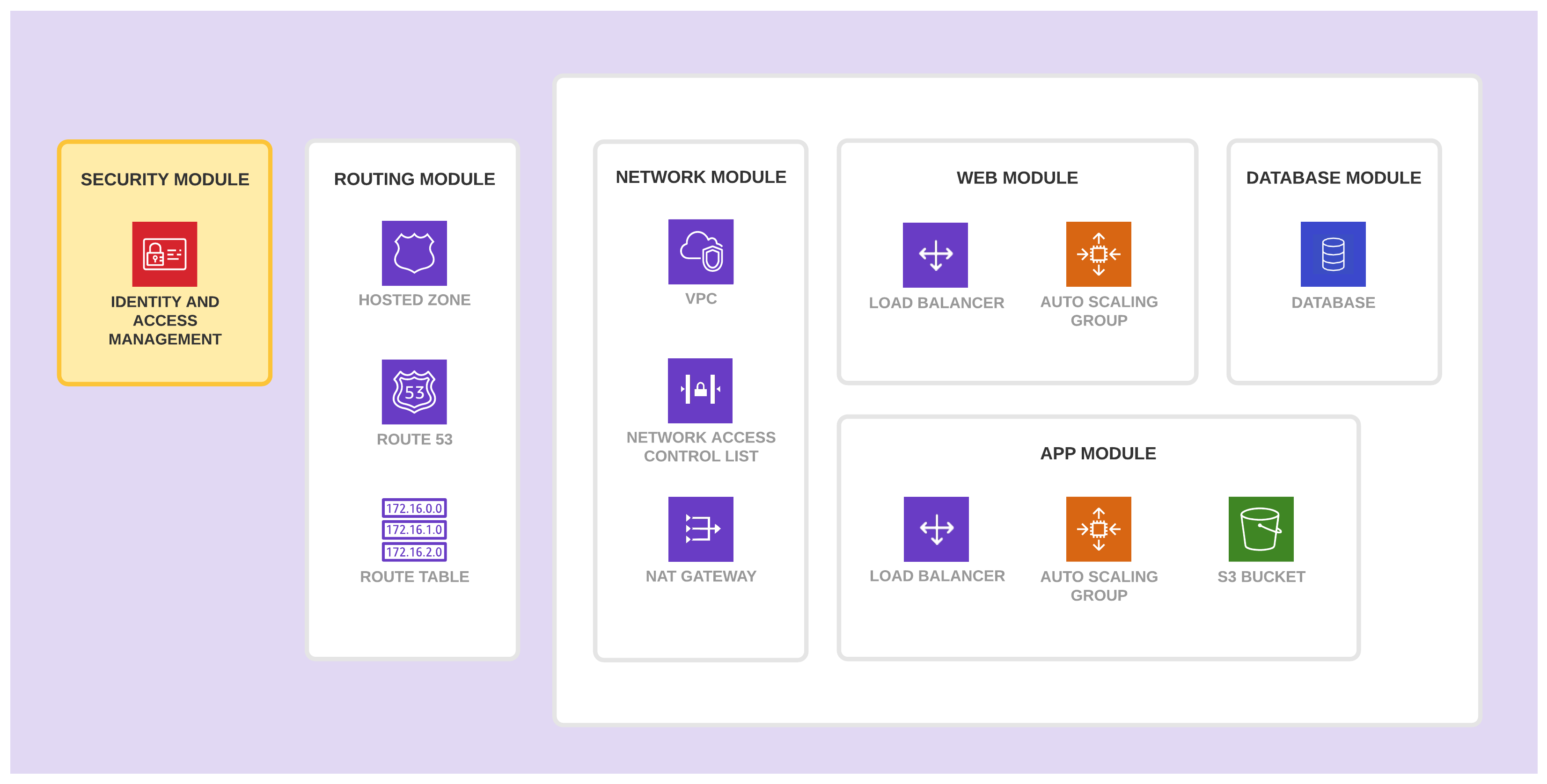 In addition to scoping, you should keep the following in mind while creating modules that configuration authors can compose and reference in root modules. Terraform Cloud for Business lets you publish modules that users deploy without writing any Terraform configuration. Follow the Create and Use No-Code Modules tutorial to create a no-code ready module that follows additional no-code ready module architecture best practices.

A nested module is a reference to invoke another module from the current module. Nested modules can be located externally or embedded inside the current workspace. Being able to nest modules is powerful feature; however, you should exercise caution to limit introducing errors.

For all types of nested modules, consider the following:

Nested external modules can be useful when you need common modules that provide standardized resources and are reused by multiple application stacks, applications, and teams. External modules are often centrally managed and versioned so that new releases are validated before consumers can use them. When you need or desire to have externally located sub-modules, here are some considerations:

Embedding a module inside your current workspace enables you to cleanly separate logical components of the module or to create a reusable code block that can be invoked multiple times during the execution of the calling module. In the following example, ec2-instance is an embedded module that the root main.tf can reference.

If you need or desire to have an embedded module, here are some considerations:

Define and use a consistent module structure

As your team develops modules, streamline your collaboration.

Use source control to track modules

A Terraform module should adhere to all good code practices.

Define and publicize a repeatable workflow that consuming teams should follow to use the modules. This workflow, like the modules themselves, should take into account user requirements.

Terraform Enterprise provides tools, like the Private Module Registry and Configuration Designer, that provide structure for module collaboration and consumption. These tools makes modules easier to use, and clarifies how teams use modules.

Make modules easy to use

Clarify how teams use modules

In this guide, you learned about recommended Enterprise patterns for creating, collaborating and consuming Terraform modules.

Back to Collection
Next

This tutorial also appears in: